Showing posts from 2016
Show all

Efficacy of RDI and ABA/Verbal behavior 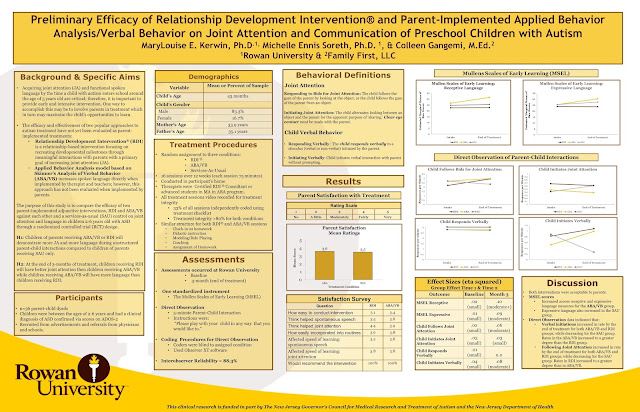 This poster was shared at this years IMFAR conference...  detailing the study out of Rowan University with side by side comparison.  We are thrilled that research is being conducted and having RDI show the gains in joint attention.   Colleen Gangemi is the RDI Certified Consultant involved in this study.
Post a Comment
Read more

Taking the scary out of “what can I do with my kid?”

April 04, 2016
Are you the type of person who springs out of bed, ready to start the day, with a plan and purpose?  Or are you more of the person who lays in bed uttering under your breath “please just 5 more minutes.”  I think I fall somewhere in between.  A huge factor to me was where I was in life…so I would absolutely without a doubt say when I was facing Autism head on…I would cling to my pillow trying to will the time to be wrong! As I reflect, I know that it’s simply human nature to get up easier when you feel like you have a “good” day ahead.  Defining a good day, now that is trickier.  A spa day, Yes! A beach day, Yes!  An IEP meeting, No!!!!  My kids are older now but it does not take too much to reach back into my memory, when I was waste high in AUTISM, trying to figure out what to do with them…trying to make a day “good” Ultimately, I was pretty successful when I ditched trying to make them behave how I thought they should, and instead focused on helping them to connect with me and t
Read more

Is RDI just a few strategies?

April 04, 2016
More then 12 years ago,  when I was first introduced to RDI, I asked the question what is RDI?  The answer I was given made some sense,  but I still didn’t get it.  I heard things like,  you slow down with your child, or you don’t ask questions.  Great because fast and questions was my normal so why would I want to do RDI?! J   I read articles and ultimately I did an entire blog called what is RDI to try and help answer that question. It’s here  http://whatisrdi.blogspot.com/2012/08/details-on-rdi-program.html In reality it’s hard to take what you read about RDI and not exclaim “ what does that mean for my family?”  That is because RDI is not a program where you are trying to change your child’s mind through teaching behaviors or skills.  Don’t get me wrong, those can be good goals.  The difference is RDI is working WITH your child’s own mind, leading, guiding them to make new connections and discoveries that make sense to them, and that helps them to relate to others and learn
Post a Comment
Read more

How did I get back to parenting?

April 02, 2016
Ok  so its not like I was not parenting my children with ASD..  however it was quite different then parenting my “typical” eldest son and youngest daughter. In some ways I was wonder woman super parent,  researching, investigating and devouring books on the subject of Autism.  I was becoming smarter in knowledge  yet when it came to connecting with my son, I felt my only direction with him was to try and get him to do stuff and teaching him skills like looking at pictures and putting them in order, or counting, or reading.  Mind you all good things…but ultimately he would do these tasks because he knew either there was a reward that followed or he knew when he got it done he could leave and go be by himself again… as a mom that did not give me warm and fuzzys!  I was not relating to my sons and they were not relating to me.  I mean there were moments,  but I knew there could be much more…I wanted more.  I did not want to accept what I have heard many times-“.well what do you exp
Post a Comment
Read more

April 01, 2016
Autism Speaks website says Autism is characterized, in varying degrees, by difficulties in social interaction, verbal and nonverbal communication and repetitive behaviors. The CDC says Autism spectrum disorder (ASD) is a developmental disability that can cause significant social, communication and behavioral challenges. There is often nothing about how people with ASD look that sets them apart from other people, but people with ASD may communicate, interact, behave, and learn in ways that are different from most other people. ASHA says treatment may include any combination of traditional speech and language approaches, alternative communication, and behavioral interventions. If you look under treatments for Autism you see a wide vast array of options. However, to the point, What does the evidence say is at the core of Autism? The repetitive behaviors, the difficulties in social interactions, they are symptoms but not the Core. Even though research says Autism is a develop
Post a Comment
Read more
More posts